Abu Hurairah (May Allah be pleased with him) reported: The Messenger of Allah (PBUH) said: "Were people to know the blessing of pronouncing Adhan and the standing in the first row, they would even draw lots to secure these privileges. And were they to realize the reward of performing Salat early, they would race for it; and were they to know the merits of Salat after nightfall (`Isha') and the dawn (Fajr) Salat, they would come to them even if they had to crawl.''[Al-Bukhari and Muslim].
I) Letter from the President

Hope everyone is well settled into the semester and did well on their midterms, insha’Allah. It’s hard to believe that the semester is already half over - this year has flown by! The board and I hope that you all enjoyed a break from studying at one of the weekly halaqas, interfaith events, or the cultural fair this semester!
Just a quick reminder: if you ever have any questions, comments, concerns, or suggestions for the MSA, please do not hesitate to tell us! After all, it is your MSA. And it is our duty to serve you. We are always open to any feedback you have.
We are currently developing an online suggestion box for the MSA website which members can use. In the meantime, you can catch us at an MSA event, around the prayer room, or via email at the following addresses:
[log in to unmask]
[log in to unmask]
[log in to unmask]
[log in to unmask]
[log in to unmask]
[log in to unmask]
The beloved Prophet (S) once said “Anyone who shows the way to something good has the same reward as the person who does it” [Muslim].
May Allah unite our GSU MSA members in a way that we will all benefit each other, insha’Allah!
Walaikum Assalaam,
Halima Ahmad
GSU MSA President
II) Islamophobia Panel: Breaking Down Stereotypes of Muslims
The Muslim Students Association, along with Middle East Socio-Political Association, Project Nur and International Socialist Organization present the Islamophobia Panel. Come and participate in this panel of discussion over the depiction of the Prophet Muhammed in the controversial film "The Innocence of Muslims". This event will take place at the General Classroom Building Room 400 on Thursday,October 18th at 5 PM.
Featuring :
III) Interfaith event with the InterVarsity Christian Fellowship

Join us on Wednesday, October 24th for another Interfaith event with the InterVarsity Christian Fellowship! Snacks will be provided! The event will begin at 11:00 AM and will end at 2:00 PM in room 470 of the University Center! Registered MSA members will get free admission to this event! If you haven't registered yet, there will be a table set up at the event so that you can pay there. Dues are ten dollars for this semester! 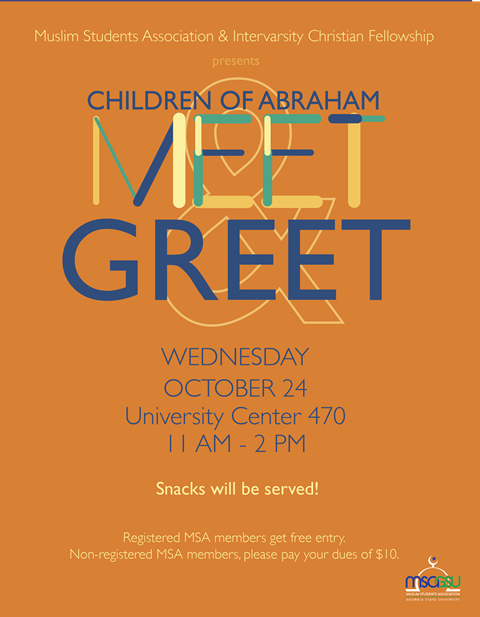 Rawiya: She Who Tells a Story will be on view September 27 through November 16, coinciding with the month-long photography festival, Atlanta Celebrates Photography. Rawiya is a photography collective founded by female photographers from across the Middle East. Rawiya presents an insider's view of a region in flux, balancing its contradictions while reflecting on social and political issues and stereotypes. As a collective, Rawiya's photographers respect the human dignity of the stories they tell, pooling resources and vision to produce in-depth photo-essays and long-term projects. Rawiya, meaning "she who tells a story" brings together the photographic styles of Myriam Abdelaziz, Tamara Abdul Hadi, Laura Boushnak, Tanya Habjouqa, Dalia Khamissy and Newsha Tavakolian.

The panel discussion Images, Narrative and Representation in the Middle East pairs the visiting Rawiya artists with Nadine Sinno of Georgia State University's Middle East Institute.
Rawiya: She Who Tells A Story at the Welch School Galleries is Rawiya's first exhibition as a collective in the United States. The exhibit and associated programs are supported in part by the Center for Collaborative and International Arts (CENCIA), Fulton County Arts and Culture, the Visiting Artists and Scholars Program of the Ernest G. Welch School of Art & Design, and the GSU Middle East Institute.

Muslim Heroes needs your help! As you may already know, Muslim Heroes is an organization that seeks to highlight the great work of Muslims serving their communities all over the world. Additionally, we seek to help create role models for Muslim youth, educate people about Islam and Muslims, and help foster leadership in the Muslim community.

Did you read this email? The first person to reply with their Panther ID # and name gets waived dues for this semester! (Newsletters only)